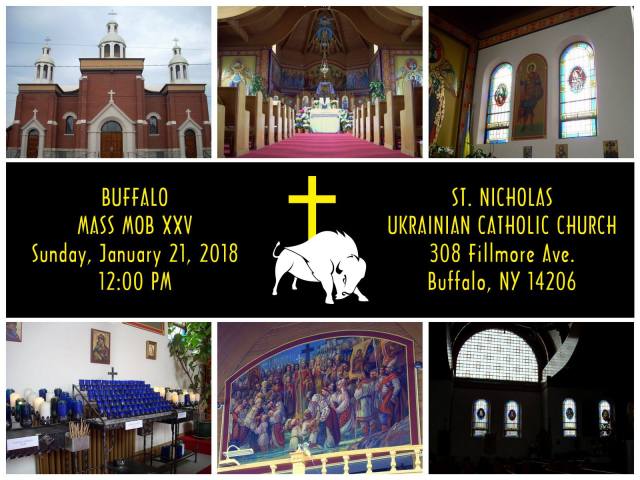 This will be our 25th Mass Mob. We are very proud of reaching this number. None of what we have accomplished would have been possible without the people who come to the Mass Mobs. Thank you.

Here is some early history of the church:

St. Nicholas Parish started in 1894, but the present Church at Fillmore and Oneida was built 90 years ago, in 1919. What follows is a brief history of our Parish both before the building of the new church and then after.

Our people began to settle in Buffalo at the end of the 19th century, when the first immigrants came to the Black Rock area of the city around 1882. Their first church was built in 1894 on Ideal Street.

The first pastor of this church was Rev. Mykola Stefanowycz (1895). This church was eventually taken over by the Russian Orthodox. In 1905, the Catholics from the East Side, organized as the Brotherhood of St. Nicholas, constructed a little wooden church at 193 Central Avenue.

The lots for the church were purchased at a cost of $300.00 and $1,800.00 was spent on the construction of the building. Fr. Ivan A. Zaklinskyj blessed the church, while Bishop Charles H. Colton, the local Latin rite ordinary, presided. In 1910, the parish was honored by a visit from Metropolitan Andrew Sheptycky, when he was on his way to the

Eucharistic Congress in Montreal, Canada. As the number of parishioners increased, it became evident that the church was too small for the worshippers.

Rev. John Ortynsky, in the church announcements of July 9, 1913, addressed the congregation by saying, “I remind you once again about buying the lots and I am asking every parishioner to offer something, according to his ability, for the purchase of the property. If we do not succeed, people would laugh at us by saying, ‘they started, but they have been unable to finish.’” The land mentioned above was located at the corner of Fillmore Ave. and Oneida Street. To the pastor and the parishioners, this location was more suitable for the construction of a church and, therefore, he encouraged the members of the parish to contribute toward the purchase of the land.

Even while preparing for the construction of the church, difficulties were experienced. Once again, the voice of the pastor could be heard in the church on November 16, 1913. He said, “I warn those who want to introduce disorder in the church that they will be sorry for their actions. Order must be kept until the matter is clarified.”

Finally, the property was secured for the church. It was blessed on September 13, 1914 by Rev. Nicholas Voloshtuk. The ground breaking ceremony took place on May 20, 1917. On October 26, 1919, the laying of the church cornerstone was performed. The dedication of the church was on November 25, 1920. Rev. John Ortynsky was the pastor.

Plans for the church were drawn by W. H. Zawadzki. His fee was $2,000. The general contractor was Bellanca and Sorgi. Excavation was done by Frank Piekarski ($1,600); pouring the concrete for the basement was done by Butler and Mills ($2,000); plumbing by Thomas Park; and heating by A. Victor & Co. The lawyer for the project was Charles L. O’Connor.

The building fund campaign was started on February 8, 1917. Rev. John Ortynsky issued authorized certificates for the collectors in Ukrainian, English, and Polish. Parishioners Wasyl Rebizant, Theodore Skorobohatyj and Joseph Yakovenko began to pay visits to the members of the parish, asking for donations. In our archives we have a journal whose 81 pages are filled with these donations.

The idea of a new church was dear to the parishioners and they used every opportunity to collect funds. A few parishioners went even to other parishes and brought in donations from friends and relatives

An interesting part of the history is that the Saint Nicholas Church was originally started at our last Mass Mob church, Saints Peter and Paul Orthodox Church.

We will have more details in the coming weeks.

In the meantime, you can visit Saint Nicholas Church’s website.