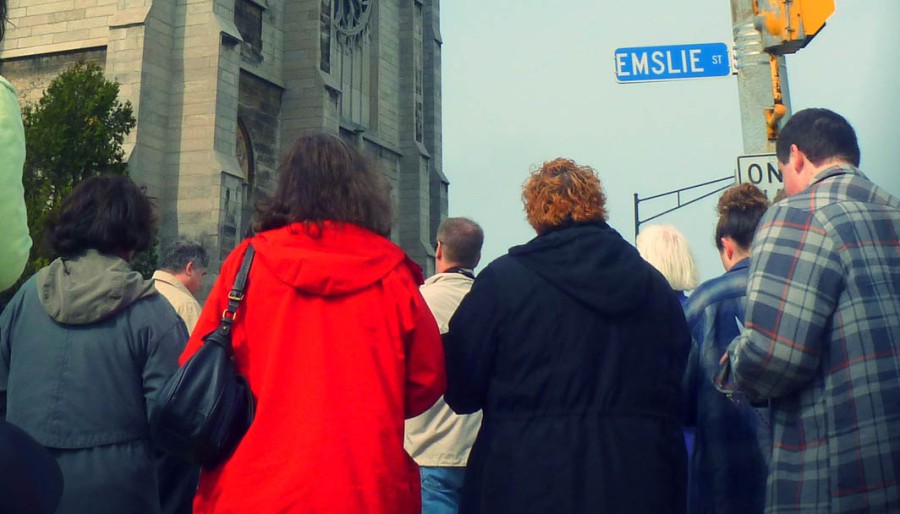 Buffalo’s shuttered St. Ann Church & Shrine will receive special attention as people will gather for Buffalo Mass Mob’s “Rosary Mob IV” at 9:30 a.m. on Saturday, May 13, 2017. The Friends of St. Ann’s, a group of preservationists, and Buffalo Mass Mob are co-organizing the event.

The public is asked to converge outside of the shrine, 651 Broadway at Emslie, to pray the rosary en-masse to show solidarity with parishioners who can no longer worship inside the edifice.

The rosary mob is a re-thinking of the original idea of a “Mass Mob” that was to have taken place at St. Ann’s in August of 2013. It never happened because the church was closed. This is the third “Rosary Mob” at the church. The first was in May of 2014.

“Saint Ann’s was originally one of the churches we thought of when organizing the group,” said Christopher Byrd, co-founder of Buffalo Mass Mob. “Working with the Friends of Saint Ann’s in doing a Rosary Mob will help raise awareness about this incredible church and efforts to save it. This is a great opportunity for the community to come and show their support for Saint Ann’s.”

The Catholic Diocese of Buffalo has closed the structure to the public since 2012.

“We have been praying outside of St. Ann’s Church since 2013 and are hoping hundreds will join us so we can show them the dedication of our core of parishioners, who sadly have been kept away from their iconic shrine since its closing,” remarked Martin Ederer, a St. Ann parishioner who is also history professor at SUNY Buffalo State. “If we could only show these people the incredible interior of St. Ann’s, they would know why we are still here seeking a solution we can all be proud of.”

The church was built by the congregation of St. Ann in 1878-1886 and features stained glass windows by Royal Bavarian Art Works in Munich, Germany, and statuary that is considered rare and priceless. The gothic structure was designed by the famed Francis Himpler of New York City. The church’s congregation opened the east side landmark without debt over 125 years ago.

The shrine in Buffalo has, since 1886, conveyed the same graces as the international shrine in Baupre, in the province of Quebec. It is a shrine to St. Ann and one of few parishes built solely by the hand of its parishioners, common German immigrants. The main tower rises over 12 stories tall and contains the largest swinging bell in Buffalo. The clock in the high tower is a weight-driven 1895 Howard mechanical pendulum clock that had to be hand-wound once a week until its weight rewind system was electrified in the late 1930s. The clock, designed to strike every fifteen minutes, still functions.

Supporters of Saint Ann’s won an appeal with the Vatican in 2014 to keep the church open as a house of worship.

“The Friends of Saint Ann’s want to work with the Buffalo Diocese to come up with a feasible plan to restore the church and open its doors,” stated Ron Bates, a parishoner and member of the Friends of St. Ann’s.

The Buffalo Mass Mob movement, started in the Queen City, has been covered by local, national and international press and has inspired groups in over twenty other cities to start their own.