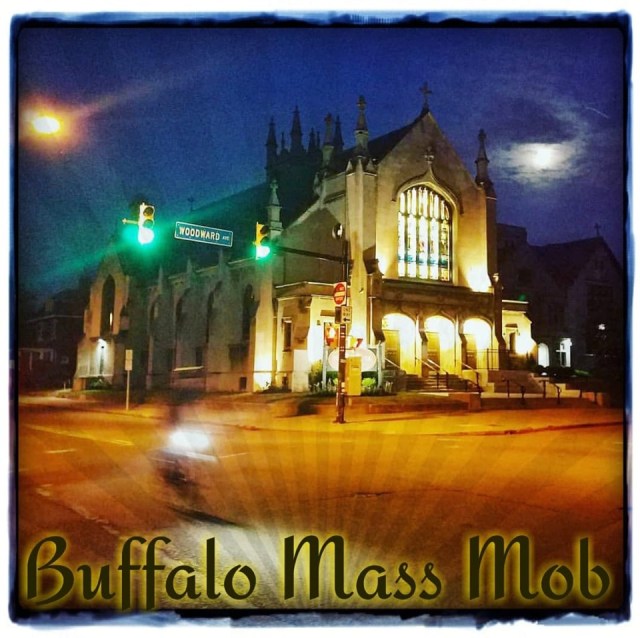 Here is an early history of St. Mark’s from Steve Cichon’s BuffaloStories.com:

A very young priest, Fr. John McMahon, was offered the chance to become pastor of the parish. His background as pastor at Mt. Carmel Church would serve him well. Mt. Carmel was down near the Commercial Slip in Buffalo’s rough and tumble waterfront /canal district, right next to where the Crystal Beach boat would dock. The area, known as “The Hooks” in those times, was filled with interesting characters from many different walks of life, while Parkside and Central Park were still greatly undeveloped. It was many of these rough and tumble sorts who made up the 30 or 40 families who started St. Mark’s. The families were mostly those of men who were dockworkers at the commercial slip at the canal terminal. There were also 70 or 80 servants, virtually all Irish, among the congregation. They were the maids and butlers in the larger Parkside and later Central Park homes.

St. Mark was a mostly Irish parish, which differentiated it from the other close by parishes like the former St Vincent De Paul (the building is now The Montante Center on the Canisius College Campus) and Blessed Trinity Church (on Leroy Street) which were mostly German parishes. The new parish began June 25, 1908.

Almost immediately, parishioners started raising money for a permanent church. In 1914, ground was broken; work was completed the next year. The statuary near the altar of the current church– likenesses of Jesus, Mary, Joseph and Anthony– were the only artifacts that made their way from the original church to the current building. It was at this time that the rectory, a wooden frame Parkside Home that predates St Mark’s, had a stone facade built up, to give it the same look as the church.

St. Mark was different from other new parishes of the time, in that the parishioners built a stand alone church first without a school. Many new parishes of the time, like North Buffalo neighbors St Margaret’s and Holy Spirit, built combination church/schools, with the church on one floor, the school on another. Parishioners settled on waiting a few years for a school, which was built in 1920-21, and still stands today. That first pastor, Father McMahon, would spend 20 years at St Marks, until he was named the Bishop of Trenton, NJ in 1928.

St. Mark’s first church, a small wooden structure, was constructed in the summer of 1908, where St Mark’s School now stands. More specifically, the church was where a hedge now stands in front the school on Woodward, parallel to the northernmost wall of the school building. The building to the left predated the church, but is currently serves as the rectory, enclosed in the same stone as the church.

As usual, Buffalo Mass Mob is excited to introduce people to a church and parish community they might not be familiar with. St. Mark is a really beautiful church. It sits at the corner of  Amherst St. and Woodward Ave. The parish is led by Pastor Fr. Joseph Rogliano.

Here are some pictures of Saint Mark available through Google, click here to view—>