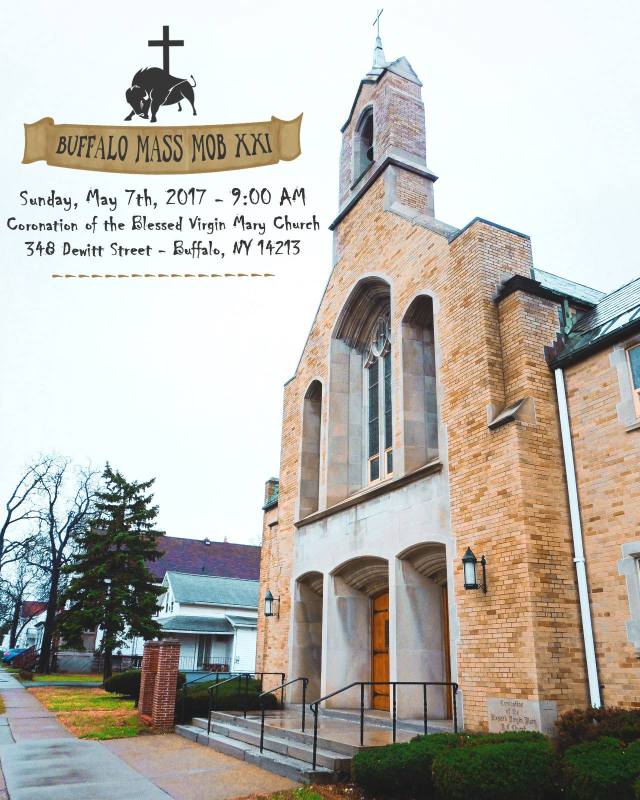 Buffalo Mass Mob XXI will take place on Sunday, May 7, 2017 at Coronation of the Blessed Virgin Mary Church on the city’s West Side starting at 9:00 am.

Buffalo Mass Mob started in 2013 as way to draw attention to struggling Buffalo inner city churches. A Mass Mob is similar to a flash mob, but the idea centers around inviting people to come worship at a church organizers select to give a one day boost in the pews and in the collection basket. Christopher Byrd, Buffalo Mass Mob co-founder said, “The concept is simple. We want to showcase Buffalo’s historic churches, but we want the community to see them in their intended purpose. A lot of the city’s churches have fallen off people’s radar screens. This gives people who come to a Mass Mob an opportunity to share in the living and breathing history of a church and an understanding of how important they are to the cultural and historic fabric of Buffalo.​ It is also a great opportunity​ for people from different faith communities to come and worship together.”

Originated in Buffalo, the mass mob movement has garnered national and international attention. Buffalo Mass Mob has also inspired people in other cities to organize their own. The Mass Mobs have drawn thousands people to historic houses of worship throughout the city. The effort has also raised over $100000 for the churches.

Coronation of the Blessed Virgin Mary Church, located at 348 Dewitt Street in Buffalo, was established in 1950 as a result overcrowding at nearby Annunciation Church on Lafayette Avenue.

More information on Buffalo Mass Mob can be found by visiting http://www.BuffaloMassMob.org.