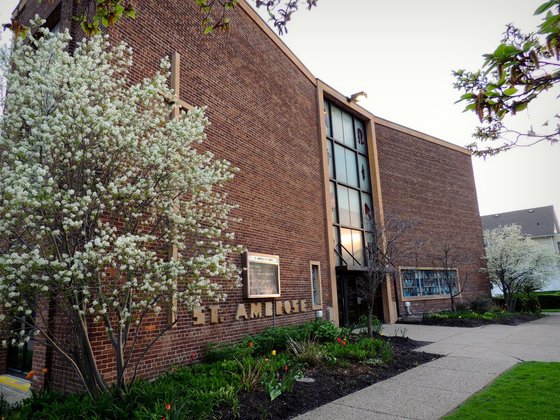 Our Lady of Charity Parish is a relatively new parish in the South Buffalo that combines the former three parishes of Holy Family, Saint Agatha and Saint. Ambrose.

Saint Ambrose Church’s history goes back to the 1930s. The following was excerpted from James Napora’s 1995 published history of the church.

With the building boom in South Buffalo during the 1920s, the number of Irish Catholic residents continued to increase steadily resulting in crowded conditions in other established Catholic churches. In 1930, Rev. John J. Nash, of Holy Family Parish on South Park ,acquired property for a new parish on Ridgewood Road. Although geographically close to Holy Family, the Catholic population in the area was growing at such a rate that an additional place of worship would soon be necessary.

With the arrival of the first pastor, Rev. David A. Coughlin, construction commenced on the first house of worship. A modest frame church seating 400 people, he dedicated the building with the inaugural mass on 20 July, 1930.

The dream of building a permanent church always remained in the forefront of Rev. Coughlin’s mind. But he realized that the people of the parish came first and with the depression of the 1930s, the parish was in no position to construct a more substantial building.

By 1937, the parish was debt free and the dream of constructing a church began to look more promising. In 1938, the congregation established a building fund. Still, with the amount growing, plans for a new building were once again put on hold during World War II. With the war over and additional money in the building fund, construction on the combination church/school began in 1949. While formulating ideas for the new building, tt was suggested that the sanctuary be placed on the second floor and the classrooms on the first. Rev. Coughlin insisted that it be on the first floor as many of the parishioners had grown older and the climb upstairs would prove difficult for them. Bishop John F. O’Hara dedicated the $275.000 building in ceremonies on 7 December, 1950.

In 1991, the church added an important set of art glass windows to the sanctuary depicting scenes based on ideas of the church in the modern world.