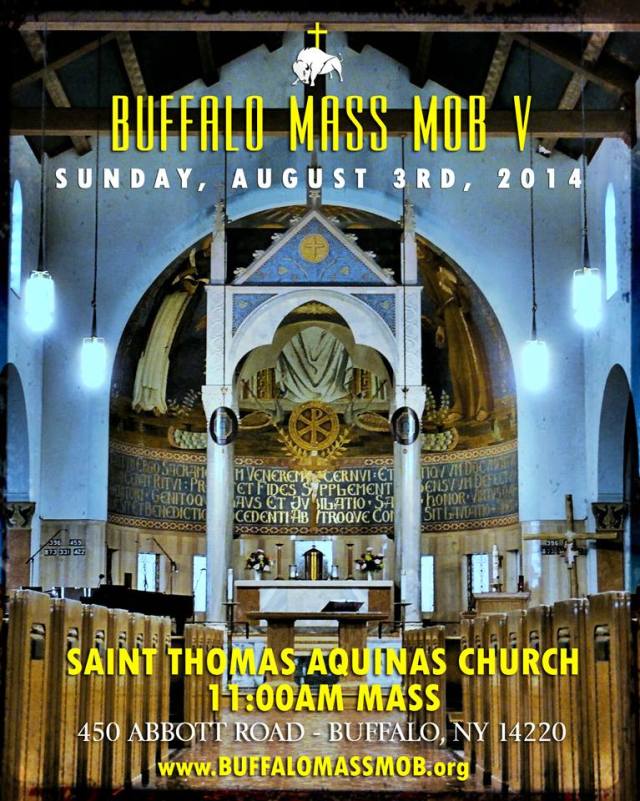 The Buffalo Mass Mob is heading to South Buffalo’s Saint Thomas Aquinas Church on Sunday, August 3rd, 2014 for 11:00 A.M. Mass. This will be the fifth Mass Mob the group has staged since it was founded in 2013 to help struggling inner city churches fill their pews. The concept is simple. Buffalo Mass Mob picks a church and asks the public to come en masse to worship on a selected Sunday.

The events are almost entirely organized through social media. The previous four Mass Mobs at Saint Adalbert Basilica, Our Lady of Perpetual Help, Saint John Kanty and All Saints churches brought hundreds of people to Masses with typically small attendance. Christopher Byrd, one of the co-founders of Buffalo Mass Mob, said, “These houses of worship helped shape and define the city as we know it. It is Buffalo Mass Mob’s hope to help create more awareness and appreciation for sacred sites in Western New York through the simple act of experiencing them in their intended purpose and encourage people to attend Mass more at Buffalo’s historic churches.”

Saint Thomas Aquinas Church, located at 450 Abbott Road, was established in March of 1920 and continues to serve its South Buffalo community. Pastor, Father Jim Judge had this to say about the Buffalo Mass Mob Five coming to his church, “The wonderful community of St. Thomas Aquinas Parish is delighted to host the next Mass Mob. It is a brilliant way to bring both young and old families back to the church, and a great invitation to new friends. On behalf of myself and our parishioners, thank you for choosing St. Thomas Aquinas!”

The Buffalo Mass Mob movement, started in the Queen City, has been covered by local, national and international press and has inspired groups in other cities such as Detroit, New York, Cleveland, New Orleans, Chicago and Rochester to start their own.